“Redoshi and Matlida were incredible women. They were among the few women survivors of the transatlantic slave trade whose stories were recorded,” says Dr. Durkin, Scholar in American Studies and Lecturer in Literature & Film at Newcastle University in the United Kingdom (England). She will be the keynote speaker for the 2021 Spirit of Our Ancestor’s Festival.

Because of the coronavirus pandemic, the festival will be held virtually as a webinar via Zoom with British journalist Sean Coughlan, an award- winning education correspondent for BBC News in London.

The Festival’s theme, “Women of Worth,” celebrates Rodishi, Matilda and all the women who were among the 110 Africans brought to Mobile, Alabama, aboard the Clotilda slave ship in 1860. They were ripped from their homes as captives by the King of Dahomey (in present-day Benin) and sold to Clotilda Capt. William Foster. They survived the horrors of the Middle Passage from Africa across the Atlantic, only to face the terrors of slavery when the ship arrived. And all of this because Mobile plantation owner Timothy Meaher bet that he could import Africans as cargo for slavery, flouting an 1808 federal law banning such piracy.

Dr. Durkin called the women “remarkable” for their resistance in the face of injustices they endured. “Redoshi refused to forget where she was from and never gave up hope of returning home. Matilda was too young to remember her homeland, but she took pride in her West African hairstyle and facial mark that identified her as a Yoruba woman. At the end of her life, she even called for compensation for her kidnap and enslavement,” she says.

Festival organizer Joycelyn Davis, vice-president of the Clotilda Descendants Association, is excited about the stories that will come forth during the interview. She also envisions finding more scattered Clotilda descendants who come forward to share their own family stories.

“I’m a sixth-generation direct descendant of Maggie Lewis, who bore two boys and three girls” Davis says. “I sometimes wonder, Did she sing African songs to her children, or tell them stories of her homeland? Did she have nightmares of the voyage? What did she and her husband do to comfort each other during their days of drama? We want to find and share more stories like this.”

Maggie was among the co-founders of Africatown in 1872. Davis says the Festival’s purpose includes educating the world about the community’s complete story. 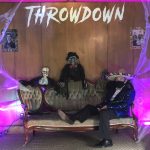 The Throwdown: An action packed art competition where artists battle head to head for 90 minutes.

Livingston Leads In the Community & Classroom

Jenny Arras is running for Mobile County Commission on a platform of empowerment, inclusion, and innovation.

The Bettie Hunter House: A Story of Perseverance

How You Can Support Local Businesses Right Now